VISUAL OF A METAPHOR

I am the vine; you are the branches. If you
remain in me and I in you, you will bear much
fruit; apart from me you can do nothing.
(John 15:5) 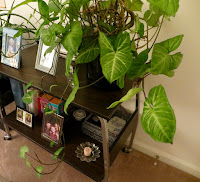 Several of my large house plants were in need of pruning and repotting. A friend came over to help me, and before I realized what she was doing. She had cut all the leaves off the dangling stems of the nephthytis plant and tossed the bare stalks aside.

When she saw my look of horror, she told me the leaves would root if I put them in water.

Our friendship being more important to me than the plants, I zipped my lips and did what she said. However, not before rescuing the discarded vines, planting them in a new pot, and putting them out on my balcony. 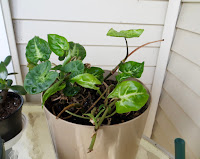 The vines sprouted new leaves and flourished. None of the leaves, however, grew roots--neither the ones in glasses of water, nor the ones I eventually planted in hopes they might root in the soil.

Though the leaves thrived for quite a while, some sooner, some later, all started to fade and die. 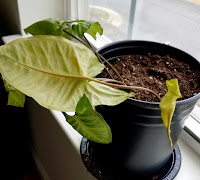 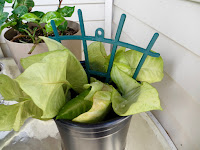 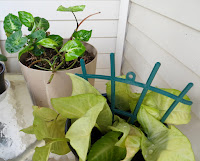 Posted by Great-Granny Grandma at 7:07 PM

I try and do this once a year, Which are in much need of pruning now. Thank you for sharing one of my favorite verses.
Blessings,
Sue

Great-Granny Grandma
I'm a mom, grandma, and great-granny, who enjoys encouraging others by sharing the message of God's love for them, as well as the awesome ways He has worked in my life. Despite my age, I am still a work in progress.

First impressions can be wrong. What seems like an omen of death is just the beginning of a journey from fear to unexpected joy.

CLICK HERE TO PURCHASE BOOK (available from Amazon in paperback or for Kindle). OR, you can double click on the picture to read or download it.

This book is my testimony. It is a story of the search for roots, purpose, and significance that led me to embrace New Age and ocult doctrines, and of the improbable journey that led me from the occult to Christianity at a time when I was convinced that I had all the answers and was no longer seeking.

An invaluable resource that can help point you to passages you don't know where to find when you need them the most. Crucial Scriptures are topically organized according to everyday issues, so as to provide immediate guidance and support in the midst of whatever situation you may be facing.
CLICK HERE TO PURCHASE BOOK (available in paperback or for Kindle). OR, you can double click on the picture to read or download it.